Owned and operated by Alyson Rodriguez Orenstein and Amanda Sylvester Altieri, TMPP has brought Philadelphia over twenty events spanning genres & mediums.  We are the home of the horror hosted “SINema After Hours” series,that brings theatre and film together.  We have also produced concerts, a short play showcase, variety shows & of course- full length plays & musicals like “Psycho Beach Party” and “The Rocky Horror Show… with Puppets.”  We also had a lot of fun doing several editions of the series Super Heroes Who Are Super!  While having a lot of fun with these projects, we explored issues like gender equality, civil rights, street harrassment & rape culture, and so much more. 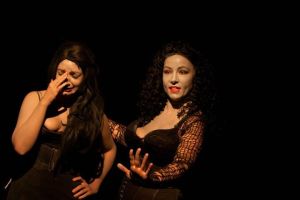 We’ve had a lot of fun with you over the past few years, Philadelphia.  While Amanda & Alyson will no longer be living in the same city, Cadavera has seen in her crystal ball that future collaboration is most certainly in the cards!    Sign up for our newsletter in the sidebar of this page, and  Like us on Facebook so you won’t miss out when it happens!  You can also keep up to date with Alyson through her website www.AlysonRodriguezOrenstein.com.

Alyson & Amanda in a promo shot for “Macabre Movie Night” the event that inspired our “SINema After Hours” series!